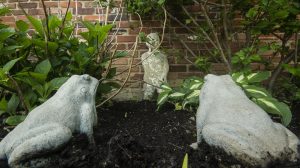 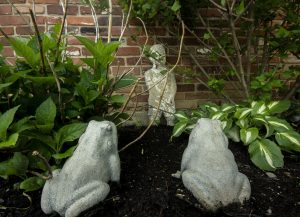 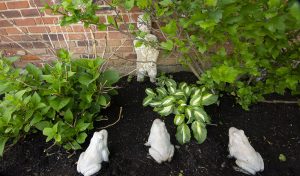 The frogs are looking up at the boy with curiosity. Before the world was populated with humans, there were animals that roamed this planet. However, ever since the creation of humans, the planet is no longer in the flourishing and nurturing state like it was in before. It is important to care for the planet in order to co-exist with the animals and nature. People can be self-centered because they do not think about the future generation. It is a normal tendency for humans to think about their world before noticing the world around them. The environment is vulnerable but so are the humans. The boy, in particular, represents the humans who are slowly chipping away from the environment because they are harming the planet that is nurturing them. People are disrupting the cycle of life and damaging the planet in permanent ways that also beneficial for them. An example would be the natural disasters and pollutions that are becoming more common in our modern history. At the same time, the frogs in the picture are also chipping away due to the humans who choose to reap the benefit for themselves. It makes it harder for the animals, such as the frogs to survive peacefully with people. Perhaps instead of the frogs looking at the boy in curiosity, it will be the boy who notices and ponders about the frogs that sit before him.

According to local legends, all Datuks were once humans who had a standing in society either for their position or special attributes. They could have been an important leader, a renowned healer, a silat warrior, a pious man or even a shaman. Upon their death, locals and their followers would sometimes offer prayers at their gravestones, in line with the...
Read More

The LGBTQ community has been struggling to make steady progress throughout the years with the growing acceptance within the American society. However, for the progress of the acceptance of the LGBTQ, there need to be changes. These changes lie within our perspectives and approach for the normalcy of the community. In order to create changes, we must think...
Read More

The Bride in the Red Dress

The bride is in an extravagant traditional Chinese wedding dress for women. In western and modern culture, white has been the traditional color for the brides to wear. However, red symbolizes good luck in Asian culture, which is why the brides would wear the bright color. Marriage is an important aspect of growing up, and it is also commonly...
Read More

Meditation on a Back Porch

The similarity between these three statues is that they are illustrating Buddha. These statues all have a different color and concept to their own interpretation on how to portray Buddha. The color chosen for these statue reminds me of my siblings and I. My brother reminds of the red one due to his easily triggered personality. One of his faults lies in...
Read More

Shrine of the Red Hot Sister

Red sandcastles and children   Close up (Dave's Story) This is the shrine dedicated to Dave's red hot sisters who have enabled him to be the 'Prince of Princes". This sister's wisdom, humility and beauty have guided and empowered him to take on the world. Though his heart is gentle he has learned to push forward in the world with smiles...
Read More

The Quiet Child: An Unspoken Voice of a Child

Childhood is a one of a kind experience that everybody goes through. A more innocent time where one is allowed to be naive and explore the world for their first time. The little girl tilts her head slightly, not only as a sign of confusion but also to see the world in a perspective that she has never seen before. Her eyes widen towards the...
Read More

This shrine honors not only the all knowing concept of the "third eye", but also the concept of eyes on the back of my head. Surveillance cameras gives us knowledge. It centers us in place surrounded by the knowledge of inside and outside of our world. The glass swirls remind us that our sense of identity is circular. We swirl in the ego trying...
Read More

My parents came to America from Vietnam to search for their American Dream. Just like most immigrants who come to this country, they all strive to be financially successful. Both of my parents work day and nights, even if that means not being able to attend our graduations or important school events. Their love for us is what motivated them to...
Read More

Grand father Buddha is shown sitting on a stump. He has the time now to contemplate the world. The pipe becomes a sign of meditation but also a sign of danger and death. At any moment his life may go up in smoke. If one meditates for too long within the sweet smell of tobacco , their lungs will blacken in time. With wisdom comes foolishness....
Read More

Shrine of the Flower Boy and the Chinese Vase

The Shrine of the Flower Boy and the Chinese Vase is about the joining of the innocence of boys and the recognition that the Flower vase is a vessel on love and seduction. The Boy is perched on the vase like a mother holding up her son as a gift to the gods. He is still young enough to play in her fertility and bath in her...
Read More

The world is surrounded with nature, she is an unstoppable force that is far beyond our human control. Her power is to protect and take care of her children with her love. The beads that the mother holds in her hands are the seeds of which she uses to plant. She has the ability to create and grow more plants to nurture the earth. Without her...
Read More

Santa and the Two Vases

Santa arrives with his sack. This is a shrine about vessels and joy. A vessel is mother. It is place we go to be nurtured and replenished. We generally are rewarded with gifts and joy from both Santa's sack and mother's vessels. Ông già Noel và hai chiếc bình ông già Noel phía sau tấm quà của ông già Noel, ông già Noel đến với bao của ông. Đây...
Read More