The Cat and the Mouse 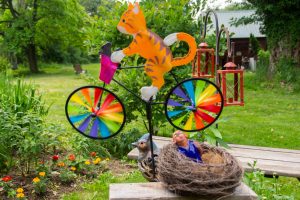 The LGBTQ community has been struggling to make steady progress throughout the years with the growing acceptance within the American society. However, for the progress of the acceptance of the LGBTQ, there need to be changes. These changes lie within our perspectives and approach for the normalcy of the community. In order to create changes, we must think and follow different paths or roads that have not been thought of or have been created before. The vibrant and colorful wheels of the bike are the colors representing the LGBTQ. Cats and mouse are typically viewed as animals that do not get along with one another, however, in this picture they are both riding on the same bike heading toward in the same direction. This cat and mouse representation can be interpreted as a hope that the idea that prejudice should not exist because there is always an exception. It is these exceptions that will create a long-lasting positive contribution to society. The bicycle has one wheel on the road and the front wheel is heading toward the open fields, which can represent one should not listen what they are taught in society but instead, and explore different paths.

The Faded Statue of a Woman: Inevitable Changes that Happens to Everyone

The statue of the older woman looks as if she blends in with the surrounding. As the...
Read More

The white faded bike is a representation of life Albert Einstein had said “Life is...
Read More

The frogs are looking up at the boy with curiosity. Before the world was populated...
Read More

The similarity between these three statues is that they are illustrating Buddha. These statues all...
Read More

The world is surrounded with nature, she is an unstoppable force that is far beyond...
Read More

This shrine honors not only the all knowing concept of the "third eye", but also the...
Read More

Shrine of the Red Hot Sister

Red sandcastles and children   Close up (Dave's Story) This is the shrine...
Read More

The city is crowded with not only people but also noises and distractions that fills...
Read More

According to local legends, all Datuks were once humans who had a standing in society either for...
Read More

The Quiet Child: An Unspoken Voice of a Child

Childhood is a one of a kind experience that everybody goes through. A more innocent...
Read More