The Bride in the Red Dress 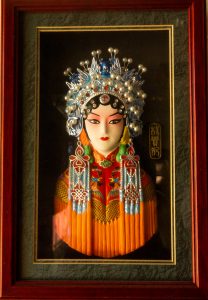 The bride is in an extravagant traditional Chinese wedding dress for women. In western and modern culture, white has been the traditional color for the brides to wear. However, red symbolizes good luck in Asian culture, which is why the brides would wear the bright color. Marriage is an important aspect of growing up, and it is also commonly expected of a couple before they officially start a family together. The idea to proclaim your love for one each other in front of your friends and family is a way to bring both sides of the couple’s families together. My mother and my father’s story is a bit different. When my parents met, they were sure they wanted to spend the rest of their lives together. After a couple month of meeting each other, my mother was pregnant with my older sister. While being overwhelmed with becoming new parents, and working to make money to sustain their growing family, the idea of marriage seems intangible. The responsibilities of having to work and take care of a newborn child made it impossible to have enough time and motivation to have a wedding. Although I know my mother wished she had the traditional wedding, she claims that having her family together is enough for her. However, it makes me consider the things my parents had given up to raise my siblings and I. They had never blame us for the things that they were not able to do such as getting married or travel whenever they wanted. I wonder what my mother would have looked like if she were to wear the traditional red wedding dress.

The world is surrounded with nature, she is an unstoppable force that is far beyond our human control. Her power is to protect and take care of her children with her love. The beads that the mother holds in her hands are the seeds of which she uses to plant. She has the ability to create and grow more plants to nurture the earth. Without her...
Read More

The similarity between these three statues is that they are illustrating Buddha. These statues all have a different color and concept to their own interpretation on how to portray Buddha. The color chosen for these statue reminds me of my siblings and I. My brother reminds of the red one due to his easily triggered personality. One of his faults lies in...
Read More

This shrine honors not only the all knowing concept of the "third eye", but also the concept of eyes on the back of my head. Surveillance cameras gives us knowledge. It centers us in place surrounded by the knowledge of inside and outside of our world. The glass swirls remind us that our sense of identity is circular. We swirl in the ego trying...
Read More

The Faded Statue of a Woman: Inevitable Changes that Happens to Everyone

The statue of the older woman looks as if she blends in with the surrounding. As the years of her youth slowly goes by, she loses her vibrancy in her appearance and in her mind. The responsibility of becoming an adult had worn her out. The older a person becomes, the less amount of freedom they truly have. It is a result of being tied down to...
Read More

Bottles and Haircuts Closeup Beauty inside the vessels The shrine of the kitties A barbershop is a common place where people are able to have conversations and an opportunity to build connections. Words spoken between a barber and their clients are not only to discuss the desired haircut, but also to talk about themselves. The time in which a person gets...
Read More

The white faded bike is a representation of life Albert Einstein had said “Life is like riding a bike. To keep your balance you must keep moving”. It is important to stroll through the various experiences you will or had in life and to not dwell on the past. If you were to put the brakes on your bike, it would be impossible to keep your...
Read More

My parents came to America from Vietnam to search for their American Dream. Just like most immigrants who come to this country, they all strive to be financially successful. Both of my parents work day and nights, even if that means not being able to attend our graduations or important school events. Their love for us is what motivated them to...
Read More

Grand father Buddha is shown sitting on a stump. He has the time now to contemplate the world. The pipe becomes a sign of meditation but also a sign of danger and death. At any moment his life may go up in smoke. If one meditates for too long within the sweet smell of tobacco , their lungs will blacken in time. With wisdom comes foolishness....
Read More

The frogs are looking up at the boy with curiosity. Before the world was populated with humans, there were animals that roamed this planet. However, ever since the creation of humans, the planet is no longer in the flourishing and nurturing state like it was in before. It is important to care for the planet in order to co-exist with the animals...
Read More

The city is crowded with not only people but also noises and distractions that fills the air. However, those who grow up in those type of environment can appreciate the chaotic noises as if it is music to their ears. Within the various pictures that hang around the boy, may seem like a disorganized mess, but are an actual subtle representation...
Read More